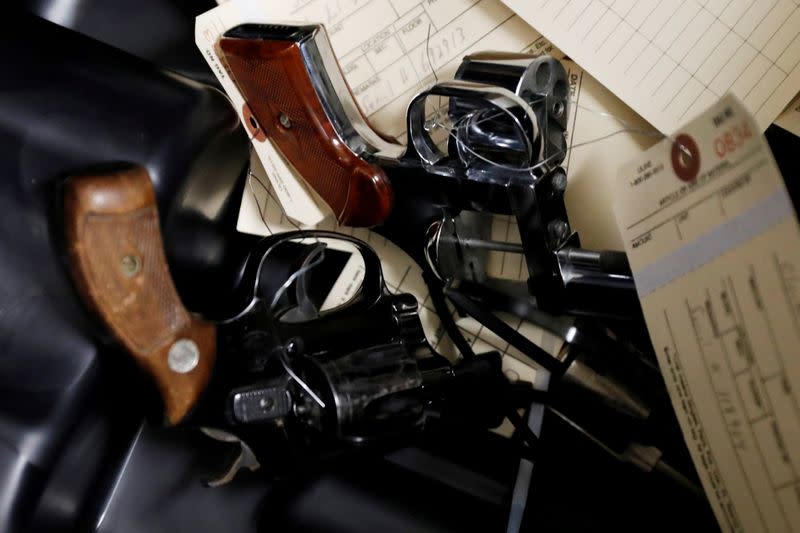 By Andrew Chung and Lawrence Hurley

WASHINGTON (Reuters) - The United States, a nation with high levels of gun violence, could witness an increase in firearms carried in public if the Supreme Court rules as expected in a major new case that could recognize wider gun rights under the U.S. Constitution.

The court, with a 6-3 conservative majority believed to hold a broad view of the right to keep and bear arms guaranteed by the Constitution's Second Amendment, on Monday agreed to hear a case that could lead to the most impactful gun rights ruling in more than a decade. It took up the case in the aftermath of a spree of mass shootings and vows by Democratic President Joe Biden to pursue new gun control measures.

The National Rifle Association-backed lawsuit challenges New York state's restrictions on people carrying concealed handguns in public. Lower courts rejected arguments by two gun owners and the NRA's New York affiliate that the restrictions violate the Second Amendment. The justices are due to hear the case in their term that begins in October.

"If the court rules as expected, that New York state law infringes the right to carry a gun in public, we're likely to see a vast increase in the number of guns carried on the streets of America's major cities," said University of California, Los Angeles law professor Adam Winkler.

The court issued major Second Amendment rulings in 2008 and 2010 that established an individual's right to keep a gun at home for self-defense in cases involving gun control laws in Chicago and Washington, D.C.

"Those cases were dealing with the only two city-wide handgun bans in country, so if you take that off the books it doesn't really change the state of play for most people," said Joseph Blocher of Duke University School of Law's Center for Firearms Law. "The kind of law being challenged here affects tens of millions more people."

To carry a concealed handgun without restrictions under New York's law, applicants must convince a firearms licensing officer that they have an actual - rather than speculative - need for self-defense.

Striking down New York's restrictions would endanger similar laws in seven other states including California, the most populous one. But the Supreme Court potentially could go further by fashioning a test for lower courts to assess the legality of gun control measures such as whether any analogous regulation existed during the country's early history.

Gun control advocates have said this could endanger measures that states already have implemented and many lower courts have upheld including expanded criminal background checks for gun buyers and "red flag" laws targeting the firearms of people deemed dangerous by the courts.

Blocher said it is unlikely that most present-day gun laws would be struck down even under such a test because "the tradition of gun regulation in the United States is rich."

Gun control advocates and their Democratic allies have argued that comprehensive gun control measures are needed to combat firearms violence. NRA leader Wayne LaPierre famously said in 2012: "The only thing that stops a bad guy with a gun is a good guy with a gun."

Gun rights advocates and their Republican allies in the past decade have wanted the Supreme Court to further expand gun rights. With the court moving rightward with the addition of three conservative justices - Neil Gorsuch, Brett Kavanaugh and Amy Coney Barrett - appointed by Republican former President Donald Trump, they hope now is the time.

Barrett last year replaced the late liberal Justice Ruth Bader Ginsburg, who dissented in the 2008 and 2010 gun rulings. Chief Justice John Roberts often takes a cautious approach in major cases but with six conservatives on the court now, the conservative bloc could prevail even without him.

In her previous role as a judge on a Chicago-based federal appeals court, Barrett wrote a 2019 dissenting opinion that could preview how she would approach the New York case.

Barrett analyzed early U.S. history on gun laws, concluding that a measure that bars people convicted of felonies from owning firearms could be unconstitutional when applied to people who show no sign of being a danger to society.

"History is consistent with common sense: it demonstrates that legislatures have the power to prohibit dangerous people from possessing guns," Barrett wrote. "But that power extends only to people who are dangerous."

(Reporting by Andrew Chung in New York and Lawrence Hurley in Washington; Editing by Will Dunham)