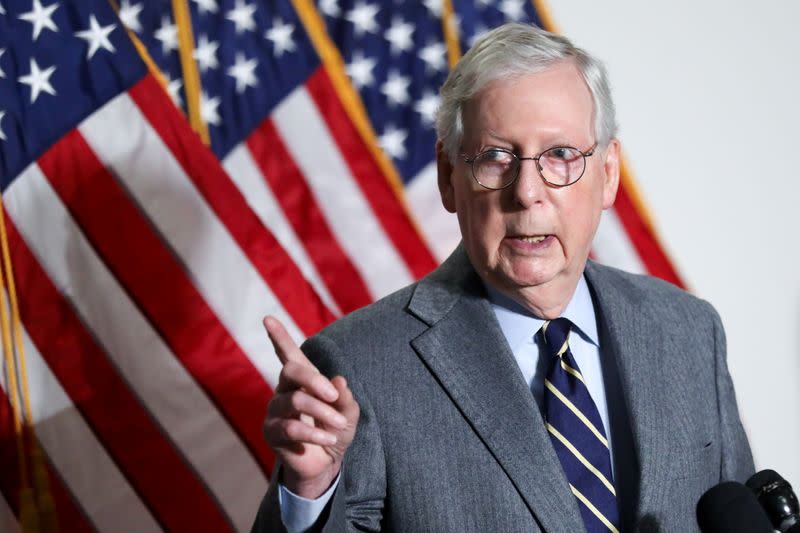 WASHINGTON (Reuters) - Even at a time of heightened political polarization, Republicans and Democrats can agree on one thing: They generally don't like Mitch McConnell very much.

The 79-year-old Senate Republican leader, long known as the "Grim Reaper" for killing off numerous Democratic initiatives, ranked dead last among fellow Republicans in an Ipsos poll conducted for Reuters.

McConnell, who entered the Senate in 1985 and served as Senate majority leader from 2015 until two months ago, has played a vital role in numerous Republican initiatives, including the cementing of a conservative majority on the U.S. Supreme Court.

He was re-elected to a seventh term last November, with a victory margin of nearly 20 percentage points.

Asked to comment on the polling data, a senior Senate Republican aide pointed to McConnell's strong re-election last year and his record-long term as Senate Republican leader, a position he has held since 2007 without opposition.

Most recently, he found himself at odds with Donald Trump after excoriating the former president on the Senate floor for his role in sparking the deadly Jan. 6 Capitol riot.

Despite his bipartisan lack of popularity, McConnell was still viewed favorably by 28% of Republicans and 19% of Democrats.

But those numbers still left him well behind other Republican figures.

The data has a credibility interval, a measure of precision, of about 4 percentage points.