Biden says Trump 'did not do his job' on coronavirus vaccination program, urges patience 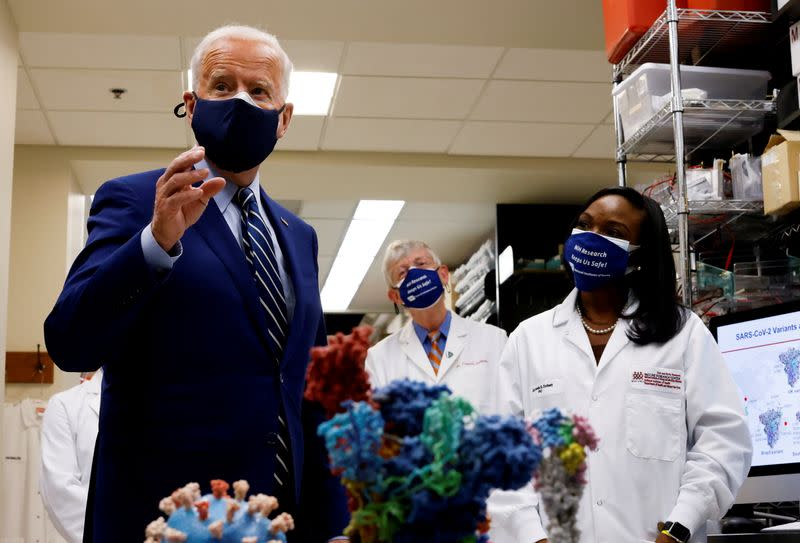 BETHESDA, Md. (Reuters) - U.S. President Joe Biden on Thursday said the coronavirus vaccination program he inherited from Donald Trump was in "much worse shape" than he had expected, while urging patience and also announcing the government has bought 200 million more doses.

"We're not going to have everything fixed for a while, but we're going to fix it," Biden said in remarks at the National Institutes of Health in Bethesda, Maryland.

With demand for the vaccine far outstripping supply, Americans are struggling to get appointments for their inoculations, leaving Biden with an acute problem less than a month after taking over from Trump.

Biden said Trump, who spent his last two months in office in a futile effort to overturn the results of the Nov. 3 presidential election that he lost, did not order enough vaccine and did not do enough to get people lined up to get vaccinated.

He said the vaccine program he inherited was in "much worse shape" than he had anticipated and that his transition team had been misled about the vaccine supply.

"While scientists did their job in discovering vaccines in record time, my predecessor - I’ll be very blunt about it - did not do his job in getting ready for the massive challenge of vaccinating hundreds of millions," Biden said.

"That is why the new Administration’s goals were being surpassed before they even came into office. Enough with the lies, excuses & political pot shots. Time to lead," he said.

Trump had expressed pride in the speed of the vaccine development on his watch.

Biden said the U.S. coronavirus death toll is likely to reach 500,000 next month. He urged Americans to wear masks to prevent the spread.

He said the U.S. government has signed contracts for 100 million doses of the Moderna vaccine and 100 million more from Pfizer to help reach the target.

"We appreciate the confidence that the U.S. government has demonstrated in our COVID-19 Vaccine," Moderna CEO Stéphane Bancel said in a press release.

Pfizer spokeswoman Sharon Castillo confirmed that it and BioNTech had reached a deal with the U.S. government.

The new vaccine orders, in addition to 400 million doses previously contracted, would allow the United States to vaccinate a total of 300 million people by July 31 using doses from the two vaccines authorized.

That would be enough to vaccinate most people in the 330 million population who want it, given that the two vaccines are not authorized for children and that many people have said they don't want shots.

In addition, Johnson & Johnson's vaccine candidate is likely to be authorized later this month, and the company expects to supply 100 million doses of its single-shot vaccine to the United States by the middle of the year.