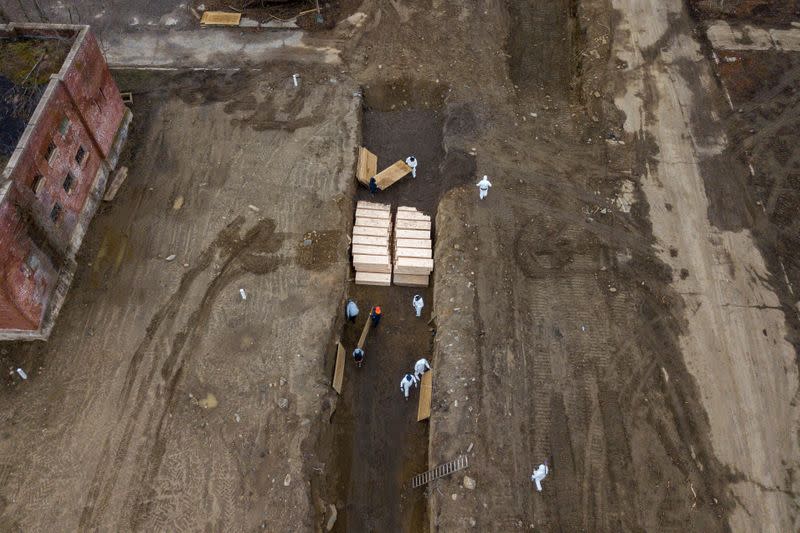 (Reuters) - COVID-19 was the primary or contributing cause of 377,883 deaths in the United States last year, with a particularly high toll among the elderly, according to a government report released on Wednesday.

The COVID-19 mortality rate made it the third leading cause of death in the United States in 2020 after heart disease and cancer, the U.S. Centers for Disease Control and Prevention (CDC) analysis found.

The CDC report is based on death certificate data between January and December 2020.

Provisional estimates from the CDC, published last month, showed that life expectancy in the U.S. fell by a year in the first half of 2020 - the biggest decline since World War 2 - and stood at the lowest levels since 2006.

The CDC's current analysis is based on provisional death estimates, but they provide an early indication of shifts in mortality trends, the agency said.

The CDC pointed out that limited availability of testing for the coronavirus at the beginning of the pandemic might have resulted in an underestimation of COVID-19–associated deaths.

"It will take some time before the age-adjusted death rate and life expectancy return to pre-pandemic levels," said Marc Gourevitch, chair of the department of population health at NYU Langone Health in New York, adding that it would be 2022 at the earliest for these trends to begin to normalize.

Gourevitch, who was not involved in the research, said the direct effect of COVID-19 on mortality is also being compounded by the pandemic’s impact on jobs and economic conditions, disproportionately affecting minority communities hardest hit by the virus.

(Reporting by Reporting by Vishwadha Chander and Caroline Humer; Editing by Bill Berkrot)