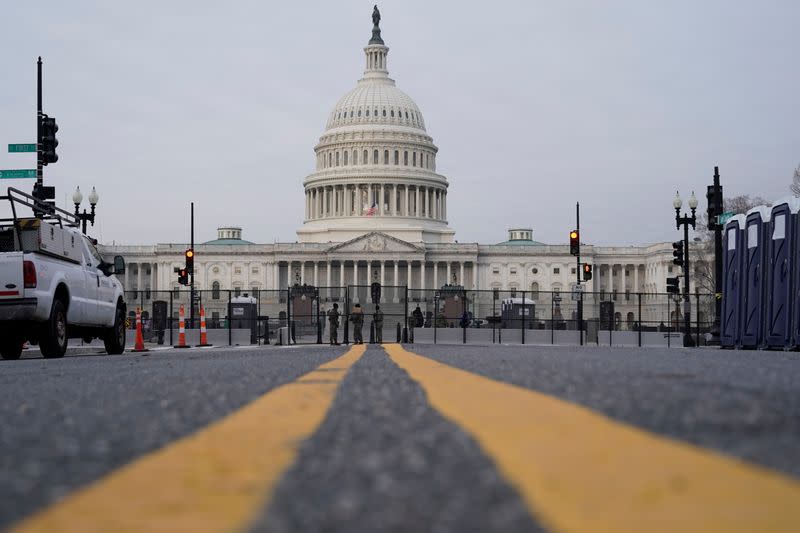 By David Morgan and Richard Cowan

WASHINGTON (Reuters) - Donald Trump's historic second impeachment trial, on a charge of inciting last month's deadly storming of the U.S. Capitol, opens on Tuesday with a debate over the constitutionality of the Senate trying a president after he has left office.

Hundreds of Trump supporters stormed the Capitol on Jan. 6 after a fiery speech in which the then-president repeated his false claims that his Nov. 3 election defeat was the result of widespread voting fraud and told them "if you don't fight like hell, you're not going to have a country anymore."

The trial is being held with extraordinary security around the Capitol in the wake of the siege including armed security forces and a perimeter of fencing and razor wire.

Trump's lawyers plan to open the trial on Tuesday by arguing that the U.S. Constitution does not allow the Senate to hold an impeachment trial for a president after he has left office, as Trump did on Jan. 20.

Most Senate Republicans have embraced that argument, which strongly suggests that Democrats will be unable to garner the two-thirds majority needed to convict Trump in the 100-member Senate. Democrats and many legal scholars reject the Republicans' constitutional interpretation.

Senate Democrats are expected to prevail in Tuesday's vote on the constitutionality of the trial. A Republican effort to block the trial on those grounds was defeated 55-45 last month.

Trump, a Republican, was impeached by the Democratic-led House of Representatives on Jan. 13 on a charge of inciting an insurrection, becoming the only president to have been impeached twice and the only former president to face a Senate trial.

"When you have such a serious charge, sweeping it under the rug will not bring unity - it will keep the sore open, the wounds open. You need truth and accountability. I believe the managers will present a very strong case," Senate Majority Leader Chuck Schumer, a Democrat, told reporters.

Eager to get beyond debates over the constitutionality of the trial, a group of nine House Democratic impeachment managers prosecuting the case will present arguments that "will be more like a violent-crime criminal prosecution, because that is what it is," a senior aide told reporters.

The managers aim to prove Trump "incited a violent insurrection to interfere with the peaceful transfer of power. That is the most serious of constitutional crimes," an aide said.

The trial could provide clues on the direction of the Republican Party following Trump's tumultuous four-year presidency. Sharp divisions have emerged between Trump loyalists and those hoping to move the party in a new direction. Meanwhile, Democrats are concerned the trial could impede Biden's ability to swiftly advance an ambitious legislative agenda.

The House Democrats face a high bar, needing the votes of at least 17 Republicans as well as all 48 Democrats and the two independents who caucus with them to secure a conviction. Democrats also hope to disqualify Trump from ever again holding public office.

Trump's lawyers argue that only a sitting president can face an impeachment trial but a majority of legal experts say it is constitutional to have the trial after an official has left office, said Michigan State University law professor Brian Kalt, a leading impeachment scholar.

Kalt was part of a bipartisan group of some 150 lawyers who signed a letter arguing that Trump can still be convicted in an impeachment trial. Signatories included members of the Federalist Society, a legal group that wields influence in conservative politics.

Trump's defense also argued he was exercising his right to free speech under the Constitution's First Amendment when he addressed supporters at a rally in Washington on the day of the Capitol attack and urged them to "fight" against the election result.

In a pre-trial document released on Tuesday, the House managers described that approach as "legally frivolous."

"Accepting President Trump's argument would mean that Congress could not impeach a President who burned an American flag on national television, or who spoke at a Ku Klux Klan rally in a white hood, or who wore a swastika while leading a march through a Jewish neighborhood - all of which is expression protected by the First Amendment but would obviously be grounds for impeachment," the Democrats said.

On Wednesday, the prosecution and defense are due to turn to the merits of the charge. They will have 32 hours evenly divided over no more than four days to present their cases. The proceedings could be extended further, with senators having time to question both sides.

If House managers want to call witnesses or subpoena documents, the Senate would have to vote to allow those. Trump's first impeachment trial had no witness testimony.

One year ago, the then Republican-controlled Senate acquitted Trump on charges of obstructing Congress and abuse of power related to his pressure on Ukraine to launch an investigation into Biden and his son Hunter in 2019.