No response as divers knock on capsized ship hull 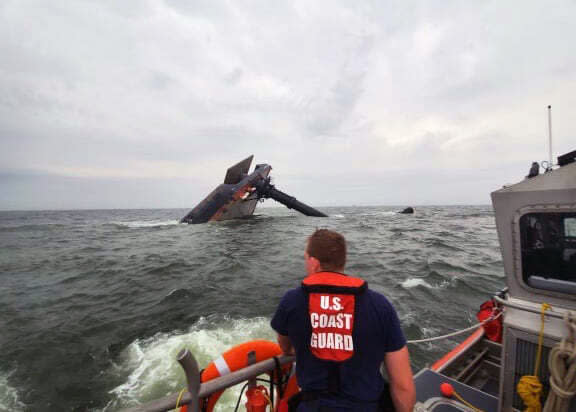 Rescuers don’t know whether any of the missing might be caught inside the lift boat called the Seacor Power that flipped over Tuesday in hurricane-force winds and high seas about 8 miles (13 kilometers) off the coast of Louisiana, Coast Guard spokesmen said.

“There is the potential they are still there, but we don’t know,” Petty Officer 2nd Class Jonathan Lally said Thursday. “We’re still searching for 12 people because there are 12 still missing.”

The Coast Guard said on Twitter that divers were able to conduct operations Thursday but didn't hear anything when they knocked on the ship's hull. The Guard said dive operations were over and would resume Friday. They will continue to search overnight by air and sea.

One person's body was recovered from the water Wednesday as searchers scanned an area roughly the size of Hawaii, the Coast Guard said. The Coast Guard said it had been classified as a “major marine casualty” with the National Transportation Safety Board joining the investigation.

The Lafourche Parish Coroner’s Office identified the dead man as David Ledet, 63, of Thibodaux — a town in southeastern Louisiana where many people work in the oil industry.

“Capt. Dave was awesome,” Joshua Segura, a mate and crane operator, said on Facebook. He said he had worked with Ledet before moving to another offshore company, describing him as one of the nicest and most humble people he’s met.

“Captain David has been on that boat over 15 years and is one of the most experienced captains I’ve ever worked with,” he wrote.

Part of the overturned ship's hull and one of its legs were still visible, leaving most of the bulky vessel underwater, in an area 50 to 55 feet (15 to 17 meters) deep, according to the Coast Guard. The ship has three long legs designed to reach the sea floor and lift the boat out of water as an offshore platform.

The vulnerabilities of lift boats in storms have been known for years, and federal authorities have investigated multiple deaths on them. Four people on board the Trinity II died in September 2011 in the Gulf of Mexico when large waves struck its hull. Then in July 1989 a lift boat sank off the coast of Louisiana in storms associated with Hurricane Chantal. Ten of the 14 people on board died.