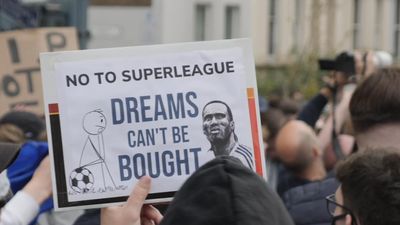 Chelsea, Manchester City and Arsenal are preparing to withdraw from the controversial Super League less than 48 hours after they agreed to help found it, according to multiplereports and an official Man City statement Tuesday.

The decisions come amid widespread criticism of the plan hatched by 12 top clubs to break away from the existing structure of European soccer and form their own exclusive league – perhaps as early as next year.

But two days later, the league appears to be on the brink of collapse. The fallout has already begun. Manchester United CEO Ed Woodward will leave the club. Liverpool lost a sponsor. Juventus president Andrea Agnelli, one of the Super League's most reviled architects, is also reportedly resigning, though Juve has denied those reports.

Chelsea's decision, the first domino to fall, came an hour before the Blues kicked off a Premier League match at Stamford Bridge, their London home. Chelsea fans protesting the Super League blocked the team's bus route to the stadium. Petr Cech, a club legend, had to plead with fans to let the bus through.

Chelsea's expected withdrawal dealt a major blow to the Super League, and could lead to its collapse in short order. Minutes later, reports suggested Manchester City would also pull out, and a few hours after that, Man City became the first club to confirm that it "has formally enacted the procedures to withdraw." Hours later, Arsenal reportedly followed.

The Super League clubs reportedly met Tuesday night to determine how to proceed.

The specific reasons for the two clubs withdrawing aren't clear, but backlash and threats likely played big roles. Both Chelsea and Man City are set to play in this season's Champions League semifinals next week, and UEFA, the European soccer governing body that opposes a Super League, had threatened to kick both clubs out of the semifinals.

The 12 Super League clubs – Chelsea, Man City, Manchester United, Liverpool, Arsenal, Tottenham, Barcelona, Real Madrid, Atletico Madrid, Juventus, Inter Milan and AC Milan – had announced their plan on Sunday night. In a statement, they said they "anticipated" that three others would join them as founding members.

But those three others – Bayern Munich, Borussia Dortmund and PSG – rebuffed the league, weakening the so-called founders' leverage.

Governments and politicians, including United Kingdom Prime Minister Boris Johnson, had also opposed the Super League, and promised to do anything in their power to prevent it. Johnson commended Chelsea and City for their reported backtracking.

FIFA, soccer's global governing body, and UEFA also fought fiercely, and promised to ban the Super League founders and their players from the Champions League, the World Cup, and all other sanctioned competitions going forward.

The intensity of the blowback – including from players and fans of Super League clubs – likely exceeded the founders' expectations. Several of the plan's engineers are foreign owners, who may have underestimated fans' passion for their clubs and their reverence for the theoretically meritocratic European soccer model. The Super League proposal would have given the founders permanent status, while forcing non-founding clubs to earn their way in. It contradicted all current European soccer competitions, which are "open," meaning participation in the top competitions is earned via on-field success.

Pundits and fans condemned the owners' greed in the aftermath of Sunday's announcement. On Tuesday, some fans celebrated the league's apparent collapse – and the role they played in it.

The fallout, though, is just beginning. The 12 clubs all left the European Club Association, an umbrella body representing the interest of hundreds of teams. Executives, such as Agnelli, left their posts at the ECA and UEFA – whose president, Aleksander Ceferin, called Agnelli a serial liar.

"We weren't aware that there were snakes among us," Ceferin said Monday. "Now we know."

UEFA issued a laudatory statement shortly after Man City's withdrawal to "welcome City back to the European football family."

More from Yahoo Sports on the Super League: