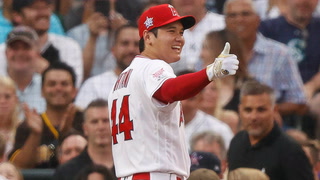 The Los Angeles Angels phenom failed to make it out of the first round of the Home Run Derby, losing a multi-round swing-off to Juan Soto, but he still received $150,000 for participating. According to the Orange County Register's Jeff Fletcher, Ohtani decided to give the money away.

Ohtani reportedly distributed checks to around 30 Angels support staffers — including trainers, clubhouse workers and media relations personnel — to thank them for their work Friday.

What's more, the 27-year-old reportedly planned to do this no matter how the Derby played out, which means he would have been giving out $1 million had he won Monday.

Ohtani still had a memorable Derby

Ohtani entered the Derby as the betting favorite, having hit 33 first-half home runs to become the No. 1 seed, but only mustered 22 home runs in the first round to tie Soto. A one-minute swing-off kept the count tied at 28, leading to a three-swing tiebreaker that Soto won.

That wasn't the end of the All-Star break for Ohtani, though, as he also started the All-Star Game on the mound while batting lead-off for the American League. Even though he only went 0-for-2 at the plate while throwing a scoreless inning, he still clearly made his presence felt.