U.S. bishops vote to draft statement that may rebuke Biden 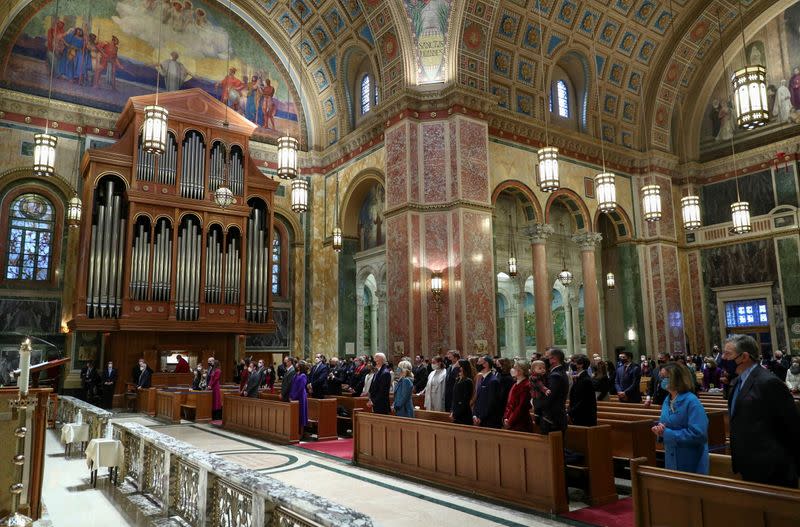 By Gabriella Borter and Julia Harte

(Reuters) -A divided conference of U.S. Roman Catholic bishops announced on Friday that they had voted to draft a statement on Holy Communion that may admonish Catholic politicians, including President Joe Biden, who support abortion rights.

The 168-55 decision to draft a teaching document on the Eucharist, a holy sacrament in the Roman Catholic faith, came after two hours of debate at the virtual assembly of the United States Catholic Bishops' Conference on Thursday, in which the bishops weighed the merits of reaffirming church teachings against the possibility of sowing partisan division.

The debate this week laid bare some of the cultural and political rifts that have rocked the church in the last several years. U.S. Catholic Church membership has dropped nearly 20% in the past two decades, according to a Gallup poll in March, as sexual abuse scandals involving predatory priests have come to light and members have become increasingly divided on social issues.

The bishops in favor of drafting the document insisted on Thursday that it would not call out any individual politician by name, but the topic of Biden's social views came up repeatedly in the discussion. Biden, the second Catholic to serve as U.S. president, has alarmed many bishops by supporting same-sex marriage and abortion rights, views they say are antithetical to church doctrine.

Some bishops want to block politicians with views like Biden's from receiving Communion. But any statement would serve as guidance, and individual bishops would be able to make an independent choice.

Asked on Friday if he was concerned by the bishops' decision and if he would be blocked from participating in Holy Communion, Biden said, "That's a private matter and I don't think that's going to happen."

Biden attends Catholic mass each weekend. The president has said he personally opposes abortion but supports a woman's right to choose. He did not keep a Hyde Amendment ban on federal funds for abortions in his first budget presented earlier this year.

Some bishops advocating for drafting the document argued they had an obligation to clarify the church's teachings for all Catholics in light of inconsistencies in the faith and actions of public officials like Biden.

"Almost daily I speak with people, Catholics...who are confused by the fact that we have a president who professes devout Catholicism and yet advances the most radical pro-abortion agenda in our history," said Bishop Donald Hying of Madison, Wisconsin, who supported drafting the document.

Opponents said they feared writing the document could sow further partisan division within the church, and that the bishops should take more time to discuss the issue before moving forward.

A Vatican official, Cardinal Luis Ladaria, wrote to the conference in May urging caution on the debate over politicians' abortion views and Communion, saying it could become a "source of discord," Catholic News Service reported.

Bishop Robert McElroy of San Diego argued against the drafting of the document, saying the move would run counter to the bishops' goal of uniting Catholics through the sacrament.

"The Eucharist...will inevitably become a tool in the vicious partisan turmoil that roils our nation," he said.

According to a Pew Research poll from 2019, about 56% of Catholics said they thought abortion should be legal in all or most cases.

Sixty Catholic Democrats in the U.S. House of Representatives released a statement on Friday urging the church not to deny elected officials Communion over one issue.

"The Sacrament of Holy Communion is central to the life of practicing Catholics, and the weaponization of the Eucharist to Democratic lawmakers for their support of a woman’s safe and legal access to abortion is contradictory," they said.

The conference's Committee on Doctrine is now expected to draft the document ahead of a November meeting when the bishops will review an amendable draft.

In 2004, the conference published a statement that said individual bishops could decide whether to deny Communion to Catholic politicians who supported abortion rights.