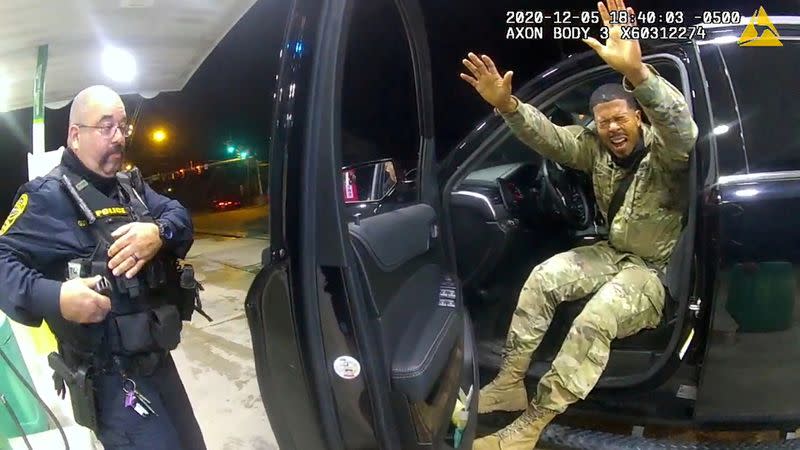 (Reuters) - Virginia's attorney general has directed his civil rights office to investigate a possible "pattern of misconduct" by police in the town of Windsor after officers drew their guns and used pepper spray on a Black uniformed U.S. Army officer during a traffic stop.

Caron Nazario, a second lieutenant in the Army Medical Corps, filed a lawsuit this month against Joe Gutierrez and Daniel Crocker, officers in the police department in the town of about 2,600 people in southeastern Virginia, over the incident that occurred in December.

The lawsuit said the traffic stop "was ostensibly for the lack of a rear license plate, though the temporary tags were affixed to the back of the vehicle and visible." Body camera footage showed the officers pointing their guns at Nazario, using pepper spray and knocking him to the ground.

"My Office of Civil Rights will be looking into whether there's been a pattern of misconduct with these officers or broadly with the department as a whole," Virginia Attorney General Mark Herring, a Democrat, wrote on Twitter on Tuesday.

There is heightened concern in the United States over racial justice and police use of force after a series of incidents including the deadly arrest of a Black man named George Floyd last May by a white policeman in Minneapolis. Protests have flared again in Minnesota after a police officer fatally shot a Black man in another traffic stop.

In an interview with CNN on Monday night, Herring called the conduct of the Windsor officers "appalling" and "dangerous," saying he saw nothing in the video that would justify their actions.

The lawsuit accused the officers of violating the U.S. Constitution's Fourth Amendment prohibition on unreasonable searches and seizures, assault and other claims. Gutierrez was fired after an investigation determined he did not follow police department policies, the town said in a statement https://www.windsor-va.gov/news/article/april/11/2021/press-release-on-police-stop-of-december-5%2C-2020 Sunday.

(Reporting by Maria Caspani; Editing by Will Dunham)